This is important. Cap-and-trade — any version of it — has been deemed wholly unacceptable by Republicans this year. But given the intense opposition to the idea, it’s easy to forget that Republicans used to consider cap-and-trade a reasonable, market-based mechanism that was far preferable to command-and-control directives that the right found offensive.

And I’m not talking about the distant past — the official position of the McCain/Palin Republican presidential ticket, not even two years ago, was to support cap-and-trade. Not just in theory, either. The official campaign website in 2008 told Americans that John McCain and Sarah Palin “will establish … a cap-and-trade system that would reduce greenhouse gas emissions.” McCain/Palin’s official position added, “A cap-and-trade system harnesses human ingenuity in the pursuit of alternatives to carbon-based fuels.”

Actually, I think conservatives have a pretty defensible position on these things. Take pollution regs. Their preferences go something like this:

If they have the opportunity to support cap-and-trade when the alternative is almost certainly some kind of command-and-control mandate (as in the case of acid rain), then they’ll take cap-and-trade. Half a loaf is better than none. 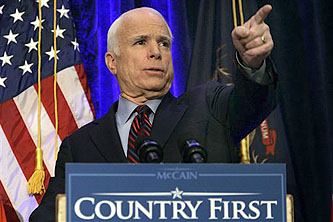 But their strongest preference is still to do nothing. So in the case of greenhouse gas emissions, where there’s still a credible chance of having no regs at all, they oppose cap-and-trade. There’s really nothing especially devious about this.

But how about Sarah Palin, who specifically supported cap-and-trade for greenhouse gases just two years ago and now assails it as a job-killing monster? Well, that’s harder to justify, but still possible. After all, it’s hardly news that vice presidential candidates are routinely forced to officially support the policies of their running mate even if they disagree with them. In fact, it’s a longtime media sport to force them to somehow justify their change of position even though everyone knows exactly what’s going on. So Sarah Palin played along as a good soldier in 2008, but once the campaign was over she no longer had an obligation to her ticket and was able to revert to her true position. It’s not exactly a principled conversion, but it’s hardly the height of hypocrisy either.

So fine. But how about John McCain himself? He didn’t owe any kind of fealty to anyone else. Cap-and-trade was his plan for reining in greenhouse gases, he fought for it, and he believed it. At least, he said he did. But then, as soon as he lost an election in which cap-and-trade seemed like an electoral winner and started up a campaign in which it seemed like an electoral loser, he dumped it. How about that?