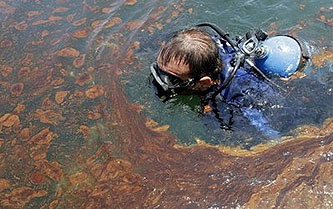 So what’s Obama going to say in his big oil spill speech tomorrow? Something narrow and technocratic, or will he toss a long bomb into the end zone? Marc Ambinder:

A senior administration official to whom I put the question this morning responded that Obama recognizes that the moment to assert his command over the disaster that is the BP oil spill has passed. Another official said Obama will use the time to “go Big. That’s where he does best.”

….If Obama goes big, there is really only one way he can attempt it: he must call on Congress to put a price on carbon by the end of the year. The pivot from gushing oil to climate change is at once harder than it seems and blindingly obvious. Oil is polluting the Gulf; it’s not raising temperatures. The transition to a more ecologically friendly economy will require carbon creation. It will also require economic sacrifice.

….If Obama went big, the political ramifications would be serious and unpredictable. The Senate and House campaign committees would plotz….But, at times, the President has different equities than members of his party. This is one of them. Figuring out how to solve this existential problem is on Obama’s shoulders, not Congress’s, really. Climate change denialism is rising, and no one on the President’s level is fighting back. The chances of building a consensus for climate change legislation will not be helped by the addition of a few Republican senators. More vulnerable Democrats are up for re-election in 2012 than in 2010. If now isn’t the right moment, there may never be a better one.

I don’t know if Obama is going to do this, but I have to admit it would fit his usual MO: wait a while for everyone else to talk themselves out, and then, when the chaos seems at its maximum, step in to make sense of things for everyone. If he does it right, his proposals (whatever they are) will seem eerily inevitable once we finally hear them. We’ll go from unstructured turmoil one day to a unified narrative the next. It won’t last long, and the political realities will still probably prevent any serious action, but for a short while his plan will seem not just right, but blindingly obvious. It’s a neat trick.