Edmund Andrews, finally pushed beyond his breaking point by yet another piece of economic hackery, vents today about the common conservative meme that it was really liberal housing policy that was at fault for the financial crisis:

Of all the canards that have been offered about the financial crisis, few are more repellant than the claim that the “real cause” of the mortgage meltdown was blacks and Hispanics.

Oh, excuse me — did I just accuse someone of racism? Sorry. Proponents of the above actually blame the crisis on “government policy” to boost home-ownership among low-income families, who just happened to be disproportionately non-white and 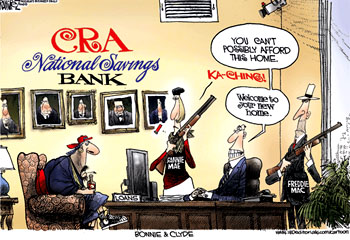 ….What makes this smear so repellant is that it blames poor people — mostly minorities — for bringing on the crisis. But what makes it so maddening is that it’s so demonstrably false. We have reams of evidence that banks and mortgage lenders actively targeted blacks, Hispanics and other immigrant groups for reckless loans. The lenders weren’t forced. They were making a fortune.

The evidence is pretty clear on this: CRA had essentially no effect at all on the housing bubble, and Fannie and Freddie can be blamed, at most, for throwing a couple of logs onto a bonfire that Wall Street had touched off long before. Those logs cost them (i.e., you) a helluva lot of money, but they weren’t responsible for the financial crisis.

But it’s a convenient story for the Sarah Palin wing of the conservative movement, since it deflects blame from the private sector to the public sector, from George Bush to Jimmy Carter and Bill Clinton, and from rich white guys to working class black and brown folks — as the Michael Ramirez cartoon above graphically demonstrates. The only problem is that it’s demonstrably not true. Read Andrews’s post and follow the links for more.