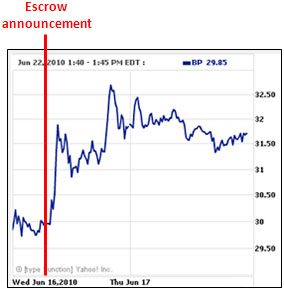 Via Steven Taylor, this chart shows what happened to BP’s stock price after President Obama finished his infamous shakedown session with BP last Wednesday. Apparently, after brutally assaulting BP’s leadership with threats of Chicago style anti-business thuggery, the market rejoiced, sending BP’s stock up more than two points in the space of a few hours.

In any case, as Dave Weigel has pointed out, the escrow account was hardly Obama’s idea in the first place:

On Thursday, Rep. Anh “Joseph” Cao told me that he pressed BP on the fund idea a month ago, inspired by the example of Exxon after its 1989 spill off the coast of Alaska. And on Friday I talked with Ray McKinney, another engineer, who is running for Congress in Georgia against Rep. John Barrow (D-Ga.). McKinney stressed that there was no serious disagreement about the escrow issue, and said Democrats were concocting a political debate when all that mattered was making BP pay and investigating the disaster.

Are Democrats concocting a political debate? No. I suppose they’re reveling in a political debate that’s mostly been handed to them on a silver platter by tone deaf Republicans, but that’s a different thing. All Obama did was announce the fund. It was Republicans who made it into yet another media firestorm.