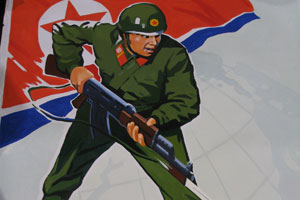 I haven’t been posting about the North Korean situation, but I’ve been following it with considerable interest ever since the start. And the biggest question all along has been: Why? Even by North Korean standards, torpedoing a South Korean ship is nuts. What on earth were they thinking? In the Financial Times today, Christian Oliver runs down the theories:

I have to say that I find all of these unsatisfactory, and I haven’t read anything better anywhere else. It’s just weird as hell. Even granted that North Korea acts like a mental case much of the time, this doesn’t make sense. There’s simply nothing good that can conceivably come out of this incident from their point of view.

So: my guess is that it was an accident. Or perhaps some combination of #3 and #5, a rogue commander who fired the shot because of some kind of chaos in the chain of command. Then, once the deed was done, we got all the usual North Korean bluster and delusion that we’ve come to know and loathe over the past few decades.

And then there’s another obvious question: just how long is China willing to put up with all this? Sharon LaFraniere had a pretty good rundown of the Chinese dilemma a few days ago in the New York Times, and their unwillingness to put serious pressure on North Korea mostly seems to come down to a combination of inertia and a fear of massive refugee flows across the border if North Korea collapses. This, again, is something I’ve never quite bought: refugee flows can be managed with international help, and in any case they wouldn’t be any kind of existential threat to China. Propping up North Korea hardly seems to be in China’s self-interest any longer, and if that’s the case I’ll bet they eventually overcome their inertia and decide that the refugee problem can be managed after all. The only question is just how long “eventually” is.