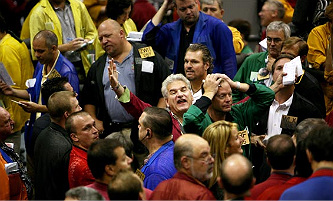 Over at New Deal 2.0, former Goldman Sachs VP Wallace Turbeville explains derivative trading to end users in an interesting way that I haven’t seen before. You should read the whole thing, but in a nutshell here’s how he describes the process:

Why do this? Why not, instead, extend an ordinary loan, have the customer post that as collateral, and sell the hedge at a lower price since there’s no credit risk built in? Turbeville:

It is widely known that deployment of credit capacity to trading with a company is far more profitable than conventional lending. This means that

Viewed from the perspective of the company making the trade, it is either willing to pay more for the packaged deal or it does not properly evaluate the all-in cost.

Turbeville goes on to explain in more detail why traders benefit from this arrangement (it locks in customers and helps banks build dominant positions in particular markets) but then circles back to his starting point:

There is a lingering, unanswered question raised by the foregoing discussion: Why do the end users prefer packaged credit and trading deals, even though the banks make more than the unpackaged alternative?

The obvious possibilities are inertia and convenience — though given the efficiency of modern finance it’s hard to believe that separate credit facilities would really end up being much less convenient, especially for large, sophisticated companies. But in a followup piece, Turbeville suggests a different answer: a conventional loan is carried on a corporation’s balance sheet as debt, while the embedded loan in a packaged derivative isn’t. So the packaged deal provides an attractive accounting loophole:

Avoiding an accounting exemption is very appealing. But perhaps the better way to address this is to encourage efficient, third party systems, short of full on clearing, to track these exposures and to facilitate efficient collateral funding in bi-lateral transactions. The simple exemption for end users in financial regulation does not encourage the development of such a system. It ignores a troubling practice which need not burden the marketplace.

In other words, maybe the end user exemption that just about everyone supports isn’t such a great idea after all. Via Mike Konczal.