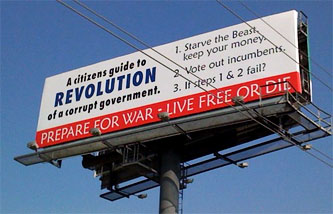 Conservative Steve Chapman summarizes recent research showing that cutting taxes does not, in fact, “starve the beast.” That is, it doesn’t motivate the public to demand lower federal spending as deficits rise. In fact, it does just the opposite:

Forced to pay for everything they get, right away, Americans would undoubtedly choose to make do with less. But given the opportunity to party now and pay later — or never, if the tab can be billed to the next generation — they find no compelling reason to do without.

Of course, over the past decade conservatives have amped up the game, and they might eventually win it. Here’s how: First, slash taxes dramatically. Then increase spending explosively. Finally, destroy the economy, thus forcing a truly gargantuan increase in the federal deficit that wrecks the creditworthiness of the federal government. Eventually, whether anyone likes it or not, that’s going to rein in spending.

Of course, it will only do so after spending has already gotten far higher than conservatives ever imagined — and higher taxes will be part of the endgame too. And America will basically be a banana republic. But it will constrain spending. And when it does, the GOP can finally claim victory!