Sometimes I try to imagine what the 1970s would have been like if comic-book movies had dominated the cinematic landscape the way they do today. Francis Ford Coppola would have presumably gravitated toward the operatic darkness of the Batman franchise, casting first Al Pacino and then Robert De Niro as Italian-American Bruce Waynes. Martin Scorsese would have 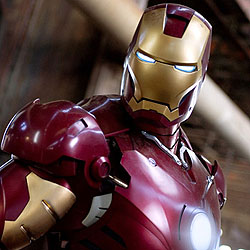 become famous for his gritty, angry take on the Incredible Hulk, with Harvey Keitel stepping into Bruce Banner’s shoes and Diane Keaton as his love interest….[Etc.]….If this revision of the ’70s sounds like a cinematic paradise, you probably liked “The Dark Knight” a whole lot more than I did.

This strikes me as backwards. After all, Godfather the book was just a garden variety genre bestseller — basically the beach reading equivalent of a good quality comic book. It wouldn’t show up on any literary critic’s list of the best 20th century novels. But Godfather the picture shows up on practically every film critic’s list of the best 20th century movies, so genre obviously wasn’t a problem here. Likewise, the problem with superhero movies probably isn’t the genre, it’s what today’s directors do with them. In the same way that Coppola transcended the usual boundaries of mob flicks and John Ford did the same for westerns, maybe they would have made great comic book adaptations too if they’d given it a whirl. And if they hadn’t? Well, it’s not as if both of them didn’t make plenty of clunkers too. Maybe Coppola’s Batman would have replaced Coppola’s Tucker, not his Godfather.

Or not. Who knows? But instead of wondering what Iron Man would be like without the superpowers, wouldn’t a better question be: if the story was any good to start with, why should superpowers ruin it? Maybe it’s inherent in the genre, but I sort of doubt it.