You all know the story of Stanislav Petrov, right? He’s the Soviet lieutenant colonel who was on duty in 1983 when an early warning system reported that an American ICBM was heading toward the Soviet Union. Luckily (and correctly), he decided it was just a computer error and decided not to start World War III. Whew!

That’s about how I felt when I read Brad Plumer’s piece on possible planetary disasters in the last issue of the New Republic. I’d never heard this story before, but it turns out that 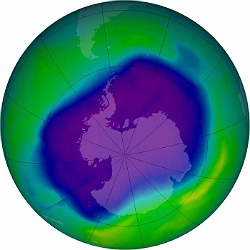 back in the middle years of the 20th century Planet Earth dodged a serious ozone layer bullet thanks to nothing more than a chance decision1 by Dupont about how to manufacture chlorofluorocarbons:

As luck would have it, DuPont had been using chlorine instead of bromine to produce CFCs. As far as anyone could tell, the two elements were interchangeable. But, as another prescient ozone researcher, Paul Crutzen, later noted, bromine is 45 times as effective at destroying ozone as chlorine. Had DuPont chosen to use bromine, the ozone hole could well have spanned the globe by the 1970s instead of being largely confined to Antarctica — long before anyone had a glimmering of the problem.

It’s not hard to see what massive worldwide ozone depletion would’ve meant. Punta Arenas, the southernmost town of Chile, sits under the Antarctic ozone hole, and skin cancer rates there have soared by 66 percent since 1994. If humans had destroyed stratospheric ozone across the globe, we would likely be unable to set foot outdoors without layers of sunscreen and dark shades to prevent eye damage. Worse, the excess UV rays could have killed off many of the single-celled organisms that form the basis for the ocean’s food chain and disrupted global agriculture (studies show that bean and pea crop yields decline about 1 percent for every percent increase in UV exposure).

Just thought I’d share. Let’s be careful out there, OK?

1In comments, Daryl Cobranchi points out that the reason Dupont used chlorine is that it’s less expensive than bromine. So the “luck” here isn’t that Dupont tossed a coin and it came up on the right side, it’s the fact that Cl2 happens to be cheaper than Br2.