Whenever you hear people talk about comparative economic performance, you should always make sure to ask for figures about productivity per hour worked, not just overall GDP. The “productivity” part adjusts for differences in population and the “per hour” part adjusts for the fact that some countries choose to work less and have more leisure. 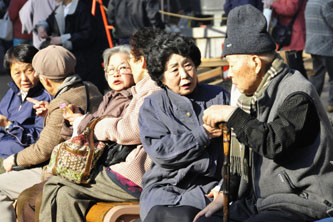 Overall GDP is still a useful measure (for example, if you just want to know the international throw weight of one country vs. another), but if you’re trying to compare the success of different economic systems you’re better off with more granular measures.

That said, another measure is to look at GDP growth adjusted for the growth in the working-age population. If a country is experiencing the consequences of a baby boom, for example, you’d expect growth rates to be pretty high as the baby boomers all enter the workforce. But if a country is getting old and the workforce is retiring in large numbers, growth is likely to be low. Via Tyler Cowen, Tino Sanandaji runs the numbers for Europe, the U.S., and Japan:

Between 1990-2007, GDP per working age adult increased by 31.8% in the United States, by 29.6% in EU.15 and by 31.0% in Japan. The figures are nearly identical! Japan has simply not been growing slower than other advanced countries once we adjust for demographic change.

That’s pretty interesting. Is Japan’s “Lost Decade” (more like two decades now) just a statistical artifact caused by an aging workforce? It seems a little too simple. Is the date range cherry picked? Japan’s productivity per hour worked, it’s worth noting, is well below U.S. and European levels no matter how you measure it. But I’m throwing this out for discussion anyway. Any credentialed economist types care to weigh in?