The stock market plummeted today, but it did so in an odd way: the Dow dropped about 6% in the space of five minutes and then gained about 5% a few minutes later. Initial news reports suggested the drop was centered on panic over Greece, but there was no special news about Greece that suddenly hit the wires at 2:30 pm and then, just as suddenly, disappeared a few minutes later. 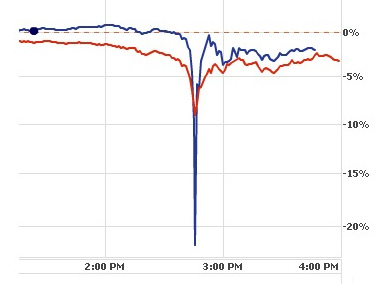 Perhaps, instead, it was just a garden variety screwup?

The WSJ reports that a trader may have accidentally placed an order to sell $16 billion in futures tied to stock indexes, when he meant to place the order for $16 million.

And there were “a number of erroneous trades” during the minutes when the market was plunging, a spokesman for the company that owns the New York Stock Exchange told Bloomberg.

The FT’s Alphaville blog points out that Procter & Gamble shares fell by more than 20 percent — about three times as much as the Dow — before regaining almost all of the ground it lost, and says the decline may have been related to a “technical screw up.” And Barron’s notes that shares in Accenture — which opened and closed the day above $41 per share — traded for one cent per share at one point today.

Planet Money’s chart of the Procter & Gamble drop is above (P&G = blue, overall market = red). So I wonder whose screwup this was? Rumors suggest it was some poor schlub at Citigroup. And what happened to all those automated systems we hear so much about that are supposed to prevent this kind of thing? After the Société Générale debacle didn’t everyone supposedly install safeguards that prevented individual traders from taking massive positions like this?