Here’s my Friday newsletter post from this week. And it reminds me: I have virtually no TV shows left that I watch regularly. Any non-HBO recommendations from the crowd?

Two of my favorite TV shows ended their lives this week: Lost and 24. Lost has gotten endless coverage for its season finale, its fan base polarized between hating it because it failed to resolve any of the questions they’ve been obsessively hashing over for the past six years, and loving it for the way it mawkishly closed the loop on all the characters they’ve come to love, finally allowing them a well-deserved measure of peace and contentment.

You can count me among the haters. But though it got less attention, it was the finale of 24 that was a bigger cultural moment: in a way, its ending, not the 2008 election, marked the final close of the George Bush era. For nine years, starting just two months 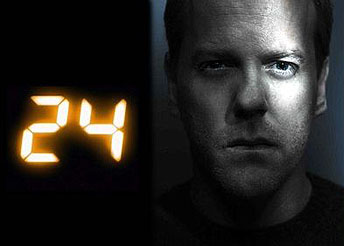 after 9/11, super agent Jack Bauer has been fighting terrorists on American soil, and in many ways the show’s message was a neocon’s wet dream: America was always under relentless attack; the bad guys were from the Middle East as often as not; time bombs really, literally, ticked; and torture not only worked, it was practically a patriotic duty.

This was, in a lot of ways, a reflection of the American id during the Bush years. But there was always more to 24 than just its anti-terrorist heroics, just as there’s more to the American id than fear of foreign attack. Jack Bauer may have stolen the show when the action was in the field, but it was the White House that stole the show the rest of the time. And there, its message was considerably different. The terrorists, it turned out, were often being bankrolled by American superpatriots. Hawkish foreign policy, it turned out, almost always failed miserably. Hawks themselves, it turned out, were almost always stupid, cowardly, scheming, and blinkered. And the terrorists themselves, far from hating us for our freedoms, were either pawns of powerful interests or else ideologues who hated us for things we actually did.

So while one of the lessons of 24 was the hawkish one that everyone — including its creators — always talked about, neither the show nor America itself was ever so simple. Even during the height of the war on terror, Americans wanted to be assured that this was all just a temporary frenzy, that there was a better way of engaging with the world than bluster and vengeance. That message was always a part of 24 too, and it was a big part of what made the show so successful. But when Barack Obama entered the White House and brought that better model of global engagement with him — well, we didn’t really need a TV show to remind us that better days and better ways would someday be possible again. We had real life for that, and that spelled the end of 24.

So will I miss 24? Not really. It filled two needs for a decade, one cathartic and one aspirational. The aspirational message never got the same attention as the heroics, but it was every bit as central to the show’s success. The fact that neither message holds our attention the way they used to is well worth the loss of an hour of Monday night escapism.