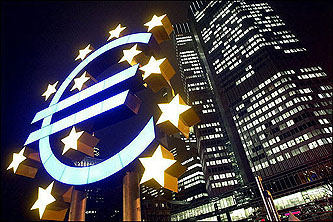 The EU has finally stepped up and created a trillion dollar fund to defend the euro against “wolfpack” investors who have been betting heavily against Greek/Portuguese/Spanish bonds and sending bond yields through the roof. However, the biggest part of the fund isn’t quite ready for prime time yet:

The €440 billion pledged by euro-zone governments isn’t immediately available cash in hand. Instead, a specially created off-balance-sheet entity will borrow the money, as needed, and then lend it out to the country or countries in trouble. The special entity’s borrowings will be guaranteed by euro-zone countries — excluding the country asking for aid. This construction helps skirt the EU treaties’ prohibition on one state’s assuming the debt of another….This portion would need approval by the parliaments of contributing countries, something that could delay a rapid payout of funds.

Italics mine. I wonder if there are going to be any recalcitrant parliaments out there? And I wonder if any of the dozen or so fights it’s going to take to get approval for this fund will just end up making Europe look even more feckless than it already does? Remember what happened when Congress initially voted against TARP?

This could turn out very well or it could…..turn out the opposite. Keep your fingers crossed.

(On the bright side, the WSJ also reports that “perhaps more important is the news that the ECB will act to shore up the shaky european bond market. Many investors had been calling for the ECB to take this step, and the ECB’s failure to announce such a plan following a ECB governing council meeting last week was a key contributor to a significant sell-off Thursday.” This is similar in spirit to what the Fed did in 2007-08, and since the ECB can do it unilaterally it will kick in immediately.)