Back in February, Joe Sestak told reporters that the White House had once offered him a federal job as an inducement not to run against Arlen Specter in the Democratic 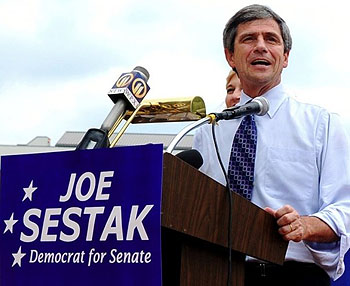 primary race for Pennsylvania’s senate seat. Since then Sestak has refused to talk further about the matter and so has the White House. Republicans have tried to make hay out of this, but Stan Brand, a Washington lawyer who specializes in ethics matters, tells David Corn today that it’s virtually certain that nothing illegal took place:

Though he dismisses Issa’s pursuit of Sestakgate, Brand says that White House actions are keeping the scandal alive: “Gibbs dissembling doesn’t help them. Don’t be defensive about it. Just say this is what goes on. They’re looking guilty over something that isn’t illegal.” He adds: “That’s not the first time that this has happened.”

This is surely one of the weirder pseudo-scandals of the year. It’s not weird that Republicans would try to get some mileage out of it. That’s politics. What’s weird is two things: (1) How could Sestak possibly have been stupid enough to mention this in the first place? and (2) Why don’t he and the White House just tell us about it?

As to #1, I have no idea. But #2 is murkier. Republicans are trying to pretend that the job offer was made “in return” for Sestak not running against Specter, but that’s ridiculous. A job offer is just a job offer. If Sestak accepted, he automatically wouldn’t be running for office. It’s like saying that I offered a cashier some money in return for not having me arrested when I walk out the door with a Blu-Ray player under my arm. It’s implicit in the whole thing.

So the White House either offered Sestak a job or they didn’t. If they didn’t, they would have said so. So presumably they did. If they and Sestak just fessed up to this, wouldn’t the story go away almost instantly? If the White House announced, say, that Sestak had indeed been under consideration for a position in the Navy Department last summer, but Sestak turned them down, then that’s the end of it. It’s not even good campaign fodder. All Sestak has to do is confess that in the heat of the campaign he got a little carried away and characterized it badly.

What the hell am I missing here? I just see no downside to this.