A balance sheet recession is different from a normal recession. It’s caused not by inventory cycles or monetary manipulation by the Fed, but by a debt fueled boom that eventually bursts and leaves the economy in the doldrums until debt levels get back to normal. That’s the kind of recession we went through last year, and it’s the kind of recession that wracked Japan in 90s. Mike Konczal points us today to a paper written a few months ago by Richard Koo of Nomura Research that compares what we’re going through today to Japan’s earlier experience:

And how long will it take for balance sheets to get back to normal? Here’s Koo on Japan’s experience:

With their balance sheets in a shambles, people had no choice but to reorient their economic priorities from the usual profit maximization to debt minimization in order to put their financial houses in order. This shift, in turn, nullified the effectiveness of economic theories and
policies based on the assumption that the private sector always seeks to maximize profits.

….Those whose balance sheets are underwater will try to pay down debt as quickly as possible to restore their credit ratings, regardless of the level of interest rates. By 1995 Japanese interest rates were almost at zero, but instead of borrowing more, Japan’s corporate sector became a net repayer of debt until 2005 — fully 10 years later — as shown in Exhibit 4….No economics or business textbook recommends that the private sector pay down debt when interest rates are at zero, but that was precisely what happened in Japan for a full ten years.

Exhibit 4 is below. Japan’s property bubble was roughly similar in size to ours, and their recession lasted 16 years. Between 1995 and 2005, net corporate borrowing was negative despite interest rates of zero percent. Monetary policy simply lost traction: you can’t force businesses that are deeply in debt to borrow even more no matter how cheap you make it. So what to do? Koo argues that the only answer is fiscal stimulus and plenty of it, even if that means piling deficits on top of deficits. “Now that the experience of Japan is available for anyone to see,” he says, “there is no reason for the U.S. to repeat the same mistake….The U.S. government should not embark on fiscal retrenchment until it is absolutely certain that the private sector is healthy enough to borrow and spend the funds left unborrowed by the government.” 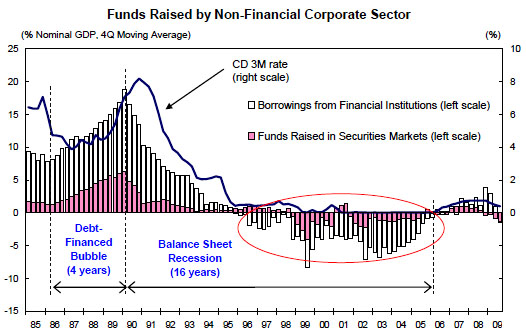