From a conversation on Twitter yesterday about financial reform:

Brian Beutler: Corker warns that the GOP is screwing up by lying about reg reform: http://bit.ly/d9HXyw

Matt Yglesias: Has “lie like crazy” ever failed as a political strategy?

Bizarrely enough, it looks like the answer might be yes. GOP wordmeister Frank Luntz famously advised Republicans a couple of months ago to attack any financial reform bill as a “bailout” regardless of what was actually in it, 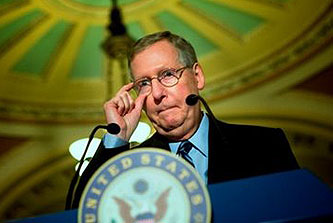 and Senate Minority Leader Mitch McConnell took that to heart and has been doing exactly that ever since.

Unfortunately for McConnell, it turns out there really is a limit to just how baldly you can lie and get away with it. The Senate reform bill quite plainly bans bailouts, and McConnell found himself under attack from all corners. President Obama called him out on this, PolitiFact labeled his statements flatly false, fellow Republican Bob Corker told reporters McConnell was wrong, and even Mark Halperin refused to dredge up some unlikely way to defend him. And guess what? It might actually be working:

After a week of attacking the pending legislation as a ticket to new taxpayer “bailouts,” McConnell is striking a different tone. Monday on the Senate floor, he called for lawmakers to move beyond “personal attacks and questioning each others’ motives” to “fixing the problems in this bill.”

And McConnell conceded, after being chastised by no less than President Obama in his weekly radio address, that “both parties agree on this point: no bailouts. In my view, that’s a pretty good start.”

….”I’m happy to hear my counterpart, my friend, Senator McConnell talk about the need for more negotiations,” said Senate Majority Leader Harry Reid (Nev.), in remarks on the floor following McConnell’s speech Tuesday. “We don’t stand in the way of that.”

Granted, McConnell might just be changing tactics. And his change of heart may be motivated more by politics than the pummelling he took over this. After all, the bailout lie wasn’t really any worse than the death panel lie. The big difference is that healthcare reform was unanimously opposed by conservatives, so nobody minded the lie. Financial reform is a little different, and relentless hostility could pretty easily backfire. That makes lies a little more costly.

Still, we seem to have reached a limit of some kind, and McConnell crossed it. Maybe we should name this the McConnell Line or something so that we know when future politicians have crossed it.