A new Pew poll is out, and it can be summarized pretty easily: everybody hates Washington DC. “By almost every conceivable measure,” says Pew, “Americans are less positive and more critical of government these days.”

No surprise there. The good news comes in two places. First, if you take a look at this chart, you’ll see that trust in government rebounded strongly during the Clinton administation and then sank like a stone during the Bush administration. So it’s far from impossible for Obama to turn things around once the economy starts to pick up. Second, in addition to hating the government, people also hate banks and large corporations these days. This suggests a 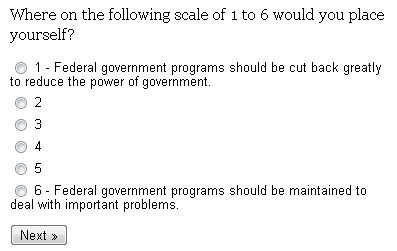 pretty obvious way for Congress and the president to get back on the public’s good side, no?

So that’s the poll. And now to random kvetching. I went ahead and took their “How satisfied are you with government?” quiz, and it turned out that I was surprisingly satisfied. More on that later. For now, though, I just want to highlight question #6 as a sign of how impoverished our discourse has become. When Pew asked about your preferred size of government, the answers ranged from “way smaller” to “the same as now.” Apparently the folks who designed the poll were literally unable to believe that any significant number of people might want government services expanded. This is despite the fact that their own surveys have shown that about 40% of Americans would prefer a bigger government that offered more services. We liberals still have some work to do.