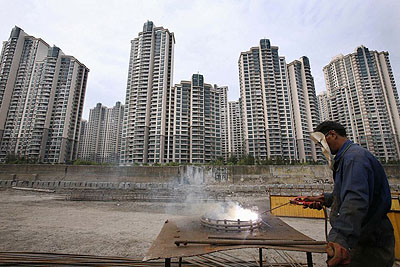 David Pierson of the LA Times reports on China’s housing bubble, which is now far more frenzied in third-tier cities like Hefei than it is in places like Beijing or Shanghai. Some excerpts:

….Xi Zhou, a cameraman for a local news channel, paid $50,000 for his 900-square-foot unit in December. He figures it’s now worth $80,000….”For people of my generation, property is all we talk about,” said Xi, 27, who will share the new home with his wife and parents. “I felt a lot of pressure to buy because the longer I didn’t, the more likely I wouldn’t be able to afford anything.”

….Many Hefei residents are as obsessed with real estate news as Angelenos are. One of the most popular radio programs here is an afternoon talk show called “Blossom Real Estate.” Some prospective buyers get half a dozen text messages a day on their cellphones from developers advertising new properties. Apartments are opened with great fanfare, with outdoor concerts in malls.

….Guo Hongbing, a marketing consultant for several developers […] gave visitors a tour of Mediterranean-style condominiums….All the properties had been sold, and Guo was interested in estimating how many were left empty by investors. His unscientific method? Looking for curtains. “See, less than half that building is occupied,” he said, pointing to one block with several bare windows. “These speculators want to buy as many as possible.”

“I felt a lot of pressure to buy because the longer I didn’t, the more likely I wouldn’t be able to afford anything.” Hey, that sure sounds familiar to this Southern California native!

Every time I read about this, someone points out that China’s housing bubble isn’t driven by debt. China’s middle class are huge savers, and they mostly buy with cash or, at the least, with a big down payment. But I wonder if that’s really true? Reliable statistics are probably impossible to get, but even if real buyers are avoiding debt, I’d be surprised if speculators are. If half the units in a typical building are being snapped up by speculators hoping to make a quick yuan, that might mean there’s more debt than we think fueling this bubble.

But at least there’s this: “China’s central government is taking steps to cool the market. This month, lawmakers raised down-payment requirements for the purchase of second homes and gave banks new powers to restrict lending to speculators. Capital gains and monthly property taxes are being considered.” Maybe it’s enough, maybe it isn’t. But it’s a hell of a lot more than U.S. regulators did.