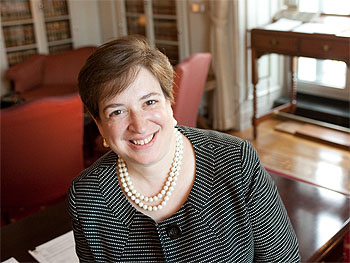 Larry Lessig, a good friend of possible Supreme Court nominee Elena Kagan, makes the case today that liberals shouldn’t be afraid of her:

Some have suggested we can know Kagan from the policy advice she offered President Clinton. That inference is a mistake….Likewise, some have wondered about Kagan’s progressive credentials because as Dean of the Harvard Law School, she didn’t take a lead in criticizing the policies of the Bush Administration. Here again, the inference is flawed….Finally, some have worried that Kagan has not pushed strongly enough to the progressive side as Solicitor General. But once again, the inference from her job to her views is unfair.

….In all of these cases, my point is not that Kagan’s work shows she is the progressive I know her to be. My point is different: That inferences from these cases that might conflict with a view of her as a modern progressive are invalid. They are not evidence of her views, they are evidence of how she did her job. And while they may not strengthen your confidence about her position as a modern progressive, neither should they weaken it.

Fair enough, as far as it goes. Still, if Kagan’s career has been marked mostly by positions in which she felt unable to publicly construct a track record of how she views the law, where does that leave the rest of us? Lessig himself may be convinced that Kagan has a sound judicial philosophy, but those of us who don’t know her personally can be excused for wanting a little more.

It’s also worth mentioning, however, that the first half of Lessig’s essay is devoted to Kagan’s ability to shift a court majority in a more progressive direction. This is the aspect of Diane Wood’s character that many people (including me) find especially attractive, so it’s worth reading just for that.