In the Wall Street Journal today, Carl Bialik has some startling news about weight loss:

How many calories must a dieter cut to lose a pound? The answer most dietitians have long provided is 3,500. But recent studies indicate that calories can’t be converted into weight through a simple formula.

….Consider the chocolate-chip-cookie fan who adds one 60-calorie cookie to his daily diet. By the old math, that cookie would add up to six pounds in a year, 60 pounds in a decade and hundreds of pounds in a lifetime.

But new research [suggests] the cookie fiend probably will see his weight gain approach six pounds, and then level off, pediatrician David Ludwig and nutrition 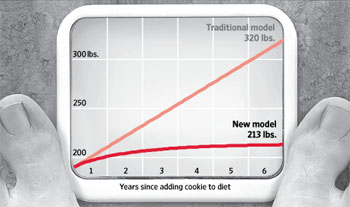 scientist Martijn Katan wrote in the Journal of the American Medical Association earlier this year. The same numbers, in reverse, apply to weight loss.

There’s a disturbing lack of common sense at work here. The handy illustration on the right, taken from the article, is for a 210-calorie cookie, not a 60-calorie cookie, but still: does anyone believe that adding a single cookie to your daily diet will take you from 200 pounds to 320 pounds in six years? Has anyone ever believed that? Of course not. It defies reason.

Not surprisingly, then, no one has ever suggested such a thing. Ceteris paribus, a certain number of calories will sustain a certain amount of weight. Take, for example, this calorie calculator from the fine folks at the American Cancer Society. It says that 2,818 calories per day will sustain a sedentary 200 pound man. Now add in that 210-calorie cookie. According to the ACS, 3,028 calories will sustain the same man at a weight of 215 pounds. It does not say that after 30 years he will weigh 830 pounds.

This is not based on dazzling new science. It’s the same result you’ll get from every calorie calculator in the world. It’s possible that new research will change the simplistic formula this is based on, but it’s going to be a rather more subtle change than 6 pounds vs. 600. Common sense should have sent this story back to rewrite.