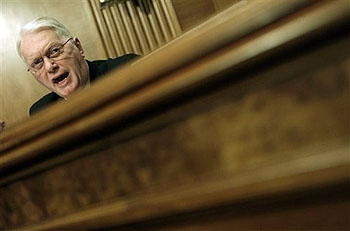 Jim Bunning’s ostensible reason for blocking the extension of unemployment benefits was one of fiscal rectitude: he wanted the benefits paid for instead of added to the deficit. For some reason I haven’t noticed anyone pointing out how dumb this is, but CBPP does the job today:

The widespread and significant decline in economic activity that defines a recession ended sometime this past summer, and the economy is in the early stages of recovery. That is good news, but it does not mean that the economy no longer needs stimulus. The economy is just beginning to climb out of the longest and most severe recession since the Great Depression. Without additional stimulus, and soon, many economists fear that the pace of recovery will be particularly sluggish — and the economy could even fall back into recession.

….At a time when many people want to work but cannot find jobs and the demand for goods and services falls well short of what businesses are capable of supplying, the key to boosting economic activity and strengthening the fragile recovery is to create additional demand….For Congress to require contemporaneous cuts in federal spending or tax increases so that measures to boost the economy do not increase short-term deficits would be unwise and counter-productive — it would reduce the overall demand for goods and services and thereby partially or fully cancel out the economic boost that the recovery measures were designed to provide.

This is a little bloodless, as befits a policy shop full of economist wonks. So let’s translate into bloggish: Bunning is a moron. The goal of stimulus spending is to increase the federal deficit. Paying for it misses the whole point. It’s like putting high-test fuel in your car and then tying a lead weight to your bumper so you can’t accelerate too fast.1

This is especially noteworthy in light of a recent research note from Joshua Aizenman and Gurnain Kaur Pasricha suggesting that “the aggregate fiscal expenditure stimulus in the United States, properly adjusted for the declining fiscal expenditure of the fifty states, was close to zero in 2009.” That is, federal spending went up but state and local spending went down, for a net stimulus of zero. (Via Tyler Cowen.)

To sumarize, then: not only is Jim Bunning a cranky old man who held the entire Senate hostage just because he could, he’s a cranky old man whose grasp of economics is nonexistent. And even at that, there were at least half a dozen Republicans who actively supported his cranky tirade and virtually none who did anything to actively fight it. Quite a party they have there.

1As CBPP points out, we should be doing something credible to rein in our long-term deficits. But that has very little to do with running short-term deficits to fund emergency stimulus during a recession.