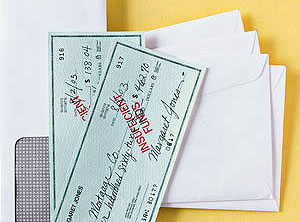 Here is reason #1 from an OCC letter explaining why it approved a bank’s request to adopt a routine policy of largest-to-smallest check posting:

Projections showing that revenue is likely to increase as a result of adopting a high-to-low order of check posting.

Can’t argue with that! If I have $50 in my checking account, and I buy lunch for $5 followed by a new pair of shoes for $70, I’ll incur an overdraft fee for the shoes. But if the bank posts the shoe purchase first, then my account is immediately overdrawn and lunch triggers a second overdraft fee. Ka-ching!

And as long as we’re on the topic, here’s reason #4 for allowing banks to post checks and debit card transactions in whichever order is most lucrative:

The Bank states its belief that a high-to-low order of posting is consistent with the majority of its customers’ preferences. The Bank surmises that the intended order, which will result in a customer’s largest bills being paid first, will have the consequence of the customer’s most important bills (such as mortgage payments) being paid first. The Bank thus concludes that a high-to-low order is aligned with the majority of its customers’ priorities and preferences.

This is all via Felix Salmon, who notes that while “surmising” is all well and good, nobody ever bothers to actually ask customers if they prefer this. But it’s even more ludicrous than that. The whole point of overdraft protection is that all your overdrafts get paid. Your largest bills are going to get paid regardless of what order they go in. The only exceptions are the very rare occasions when your cumulative spending goes beyond your overdraft limit and the bank really does have to choose which checks to honor. But the vast, vast bulk of overdrafts are small, so this is rarely a genuine issue and could be easily solved with a phone call. Unfortunately, that would halt the gravy train for the 99% of transactions that don’t go over the limit and are being reordered solely to rip off consumers.

And that, ladies and gentlemen, is your bank regulators at work. Any questions?