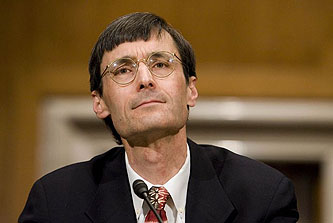 Today’s big news is that the White House announced a bunch of new recess appointments:

Fed up with waiting, President Barack Obama announced Saturday he would bypass a vacationing Senate and name 15 people to key administration jobs….The 15 appointees to boards and agencies include the contentious choice of union lawyer Craig Becker to the National Labor Relations Board. Republicans had blocked his nomination on grounds he would bring a radical pro-union agenda to the job, and they called on Obama not to appoint Becker over the recess.

Obama went ahead anyway, while also choosing a second member for the labor board so that four of its five slots will be filled. The board, which referees labor-management disputes, has had a majority of its seats vacant for more than two years, slowing its work and raising questions about the legality of its rulings.

This is pretty fascinating. Years ago, after Republicans filibustered a Carter nominee to the NLRB, the two parties made a deal: the board would have three appointees from the president’s party and two from the other party. So after he took office Obama nominated two Democrats and one Republican to fill the NLRB’s three vacant seats and got support from a couple of Republicans on the HELP committee for the entire slate. But when it got to the Senate floor John McCain put a hold on Becker, and his nomination — along with the others — died.

Fast forward to today and Obama finally decides to fill the board using recess appointments. But what does he do? He only appoints the two Democrats. This is not what you do if you’re trying to make nice. It’s what you do if you’re playing hardball and you want to send a pointed message to the GOP caucus. You won’t act on my nominees? Fine. I’ll appoint my guys and then leave it up to you to round up 50 votes in the Senate for yours. Have fun.

Does this mean the postpartisan Obama is finally dying away, overtaken by a newly muscular president willing to duke it out with a Republican Party that he finally realizes has been utterly consumed by its hardcore obstructionist wing? Maybe! Stay tuned.