A recession is typically defined primarily as a drop in GDP. But how is GDP calculated? Here is James Hamilton a couple of years ago:

It is possible to think of GDP in two different ways. One is as the dollar value of all final sales of goods and services produced by factors of production located within the United States. The second is as the dollar value of all the income generated by that production. The two measures are equal to each other by definition. But in practice, one can try to calculate GDP either using production data or using income data. If we obtain the production and income numbers from different sources, we’re certain to end up with different numbers for what is supposed to be the nation’s GDP. The difference between “gross domestic product” (GDP) and “gross domestic income” (GDI) is simply reported by the BEA as a “statistical discrepancy.”

So what accounts for this discrepancy? A few years ago, Mark Thoma suggested the answer had something to do with the level of non-defense government consumption expenditures, but a better answer was apparently elusive. 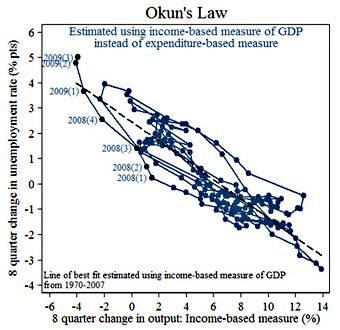 In any case, Justin Wolfers writes over at Freakonomics today that when it comes to the real economy, the “discrepancy” might actually be a problem with standard GDP calculations. Maybe GDI is the measurement that does a better job:

This alternative measure of output growth suggests that the recession may have been deeper, and longer-lasting than previously thought, although data for the fourth quarter aren’t yet available. While many economists believe the recession ended in the second quarter of 2009, this income-based measure of output kept shrinking in the third quarter, too.  And while the expenditure-based measure is back to its level from the third quarter of 2006, the income-based measure suggests that output is still 3.5 percent below that level.  That’s a pretty big hole to dig out of.

One way or another, our current recession really does appear to be deeper and longer-lasting than the usual GDP calculations suggest. Maybe that’s an illusion, or maybe there really is a problem with the way we measure GDP. We aren’t likely to get any firm answers on this front anytime soon, but at least the questions are worth asking.