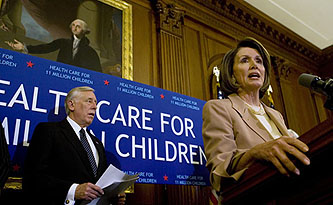 If you have a life, you don’t care about the subject of this post and have never heard of it. But then there are the rest of us, the people who read (and write!) this blog, and for us the issue of the day is “deem and pass”:

After laying the groundwork for a decisive vote this week on the Senate’s health-care bill, House Speaker Nancy Pelosi suggested Monday that she might attempt to pass the measure without having members vote on it. Instead, Pelosi (D-Calif.) would rely on a procedural sleight of hand: The House would vote on a more popular package of fixes to the Senate bill; under the House rule for that vote, passage would signify that lawmakers “deem” the health-care bill to be passed.

The tactic — known as a “self-executing rule” or a “deem and pass” — has been commonly used, although never to pass legislation as momentous as the $875 billion health-care bill. It is one of three options that Pelosi said she is considering for a late-week House vote, but she added that she prefers it because it would politically protect lawmakers who are reluctant to publicly support the measure.

For Republicans, this is the latest sign of a liberal apocalypse. Here’s Sarah Palin tweeting frantically: “Listen2 MARK LEVIN radio;he argues Obamacare passage plan UNCONSTITUTIONAL (will Dems care about that?) Art. I is clear how bill becomes law”

Well, whatever. Republicans have used this procedural tactic before too, Democrats have challenged it, and the Supreme Court ruled that it was fine. So they’re on thin ice both on grounds of partisan hypocrisy and legal fundamentals. Still, it’s remarkably tone deaf for Democrats to do this. Like it or not, process has become a big issue as healthcare has dragged along into its second year, and the public really does seem to have grown weary of endless procedural wankery. What’s more, there’s no benefit. Any Democrat who thinks that Republican attacks this fall are going to be blunted even a smidge because, technically, they voted for the package of fixes, not the main bill, is living in fantasy land.

In fact, it will probably just make things worse. They still will have voted for the Senate bill, but it’ll look like they’re trying to hide the fact. That’s the worst possible tack they can take. For the fence sitters, their best hope is to pass the bill — through gritted teeth if they must — and then come out of the House chamber smiling broadly and proclaiming it a historic advance for ordinary Americans of all incomes etc. etc.

To summarize then: deem-and-pass won’t help anyone, puts process back in the news, will give Republicans another free shot at Democrats, and makes individual House members look like cowards. But other than that it’s a great idea.