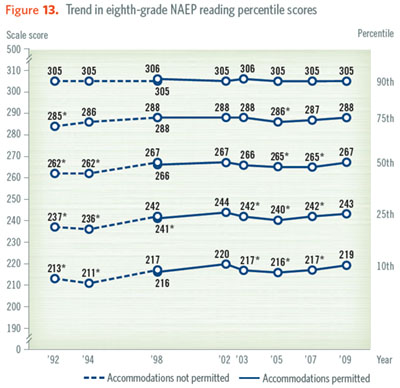 Is our kids learning? Probably, but at least when it comes to reading they aren’t learning any better than in the past. NAEP reading scores for 2009 have just been released and they’re pretty uninspiring. Scores for 8th graders have been flat since 2002, and as the chart on the right shows, they’ve been flat at pretty much all achievement levels. Good readers are reading as well as they did in 2002 and poor readers are reading as poorly. Black-white and Hispanic-white gaps have narrowed ever so slightly, and the male-female gap has stayed about the same. Broken out by public, private, and Catholic schools, scores still remain flat across the board.

So is there any good news? Well, scores for the worst readers have improved at the 4th grade level, and it’s possible that these improvements will eventually filter up to the higher grades as well. That hasn’t happened in the past (in fact, gains in the lower grades tend to wash out at higher grades), but you never know. Maybe this time they will.

Of course, there is another bit of good news: American students may not be improving much in reading, but neither has there been a wholesale collapse, as news reports sometimes suggest. Reading scores are slightly up over the past two decades, and math scores are up considerably. But count me as skeptical of this, from the New York Times:

In seeking to explain the lagging reading scores, some experts point to declines in the amount of reading children do for pleasure as they devote more free time to surfing the Internet, texting on cellphones or watching television. Others blame undemanding curriculums.

For example, Susan Pimentel, an expert on English and reading standards who is a member of the governing board that oversees the test, said that American schools were fairly efficient at teaching basic reading skills in the early grades, but that as students matured they need to be consistently challenged to broaden those skills by reading not only complex literature but also sophisticated nonfiction in subjects like history and science.

But for whatever reason, we seem to have gotten a lot better at teaching math (scores are up 20+ points over the past two decades, roughly two grade levels) but not at teaching reading. The reasons remain elusive.