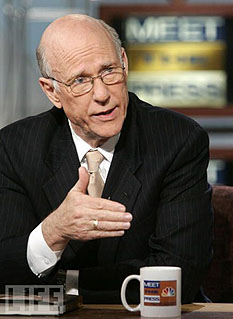 Guess what? According to a CIA memo, Republican senator Pat Roberts was told in 2003 about the agency’s plan to destroy interrogation tapes that provided graphic evidence of the widespread use of torture against detainees, and he thought it was a fine idea:

At a closed briefing in 2003, the chairman of the Senate Intelligence Committee raised no objection to a C.I.A. plan to destroy videotapes of brutal interrogations, according to secret documents released Monday.

….According to a memorandum prepared after the Feb. 4, 2003, briefing by the C.I.A.’s director of Congressional affairs, Stanley M. Moskowitz, Scott Muller, then the agency’s general counsel, explained that the interrogations were reported in detailed agency cables and that officials intended to destroy the videotapes as soon as the agency’s inspector general completed a review of them. “Senator Roberts listened carefully and gave his assent,” the C.I.A. memo says.

….The same document says that Senator Bob Graham of Florida, the Democrat who had preceded Mr. Roberts as chairman, had proposed that the committee “undertake its own ‘assessment’ of the enhanced interrogation,” the C.I.A.’s term for coercive methods. Agency officials told Mr. Roberts that they would oppose allowing any Senate staff members to observe interrogations or visit the secret overseas prisons where they were taking place.

“Quickly, the senator interjected that he saw no reason for the committee to pursue such a request and could think of ‘10 reasons right off why it is a terrible idea,’ ” the report says.

Roberts says there’s more to the story, but apparently he didn’t feel inclined to explain exactly what that “more” might be. Stay tuned for what’s sure to be an entertaining explanation one of these days.