The day after Obama’s State of the Union address my sister called me. “Was there anything in it for me?” she asked.

This has become sort of a running joke between us. The answer is always “no.” That’s because when presidents announce plans, she pretty much never benefits from them. Child tax credits? She doesn’t have kids. Education loans? She graduated 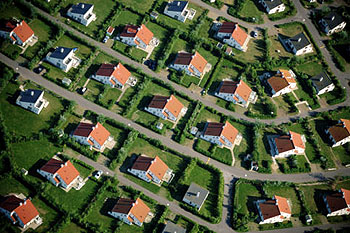 I was reminded of this by a link from Atrios to a recent Joel Kotkin piece called “The War on Suburbia”:

A year into the Obama administration, America’s dominant geography, suburbia, is now in open revolt against an urban-centric regime that many perceive threatens their way of life, values, and economic future….For the first time in memory, the suburbs are under a conscious and sustained attack from Washington. Little that the administration has pushed — from the Wall Street bailouts to the proposed “cap and trade” policies — offers much to predominately middle-income oriented suburbanites and instead appears to have worked to alienate them.

And then there are the policies that seem targeted against suburbs. In everything from land use and transportation to “green” energy policy, the Obama administration has been pushing an agenda that seeks to move Americans out of their preferred suburban locales and into the dense, transit-dependent locales they have eschewed for generations.