The case of Aafia Siddiqui has always been a strange one. But strange or not, the Bush administration believed that she had connections to al-Qaeda, and after a long manhunt they took her into custody in 2008. The next day she tried to kill several U.S. soldiers and 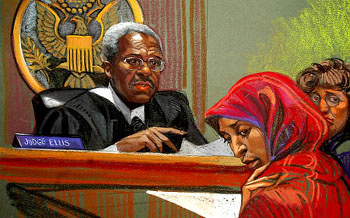 FBI agents who had come to question her. Shortly after that she was transported to the U.S., arraigned in New York, and put on trial. Marc Ambinder continues the story:

What makes Siddiqui’s conviction relevant for the current debate is that she was captured, on a recognized battlefield — Afghanistan — and tried to kill FBI agents and American soldiers who had come to question her. Siddiqui, 40, could easily have been designated as an enemy combatant. But the Bush administration determined instead that she be tried in federal court. She was read her Miranda rights, and given access to a lawyer.

….The police found documents on her possession that led them to believe that she was part of a plan to cause a mass casaulty incident in the United States. Specific locations listed on the documents included the Brooklyn Bridge and the Empire State Building. Notes on one document referred to the components of a dirty bomb. They found various sealed canisters of chemicals and gells.

….Siddiqui’s conviction on February 3, 2010 was noted in a press release by the Justice Department. So far as I can tell, Republicans on Capitol Hill did not utter a peep of protest.

I’m willing to bet they didn’t utter a peep of protest when she was brought to New York in 2008, either. Funny that. (Via Steve Benen.)