The Senate voted Monday to advance a $15 billion jobs-creation measure, giving Democrats a key victory as they seek to reverse their declining political fortunes by emphasizing legislation to boost the economy. The chamber is now poised to pass the measure later this week.

Five Republicans, including new Sen. Scott Brown (Mass.) joined 57 Democrats in voting to proceed on the jobs bill, after a suspenseful buildup in which members of both parties wondered whether Senate Majority Leader Harry Reid (D-Nev.) could cobble together enough votes to proceed.

This is….just sad. Compared to a “normal” level of unemployment, there are currently something like 10 million more jobless people than we ought to have. Without action, that number will still be around 8 million next year. And we’re screwing around with a payroll tax cut that might, with a tailwind, create around 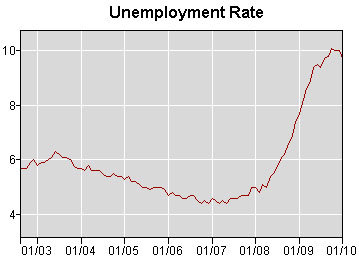 100,000 jobs per year. It’s not that this a bad policy choice, it’s that the scope of the action is so plainly inadequate compared to the size of the problem.

Why so small? Because Republicans won’t agree to a bigger bill, so Harry Reid has decided to push through a bunch of smaller measures instead. His thinking, apparently, is that he’s going to dare Republicans to vote against these bills. If they cave, he wins. If they don’t, it becomes good campaign fodder for November.

This is pretty unlikely to work, though. Reid managed to lasso a few Republicans for a tax cut, but he probably won’t be able to do even that for the rest of his package. They’ll filibuster and defeat even these small bore proposals.

Will they pay a price for this? Get serious. Suppose you’re a Democrat running against some Republican who voted against Monday’s bill. “You’d all have jobs today,” intones your attack ad “if only Senator Wingnut hadn’t voted against a moratorium on payroll taxes.” Will anyone believe it? I don’t see it. It’s too abstract and people are too jaded about this kind of stuff actually having an effect. Sen. Wingnut will just say the bill was another Washington boondoggle that wouldn’t have created a single job, the tea partiers will all cheer, and that will be that. It’s just too hard to make the case for obstruction unless you can point to something that’s both big and concrete.

The payroll tax bill is better than nothing. But it’s also a sad commentary on the ability of Congress to tackle actual problems.