Back in the early 90s Joel Garreau wrote a book called Edge City. Basically, an edge city is a suburb, but it’s a suburb that has the usual sprawl of stucco houses plus at least five million square feet of leasable office space. In other words, it’s a self-contained community where people can both live and work, and until the mid-70s such places really didn’t exist. Today they’re ubiquitous. So what happened? Garreau explains:

When I started asking developers when, exactly, they first thought it plausible to build quarter-of-a-million-square-foot office monoliths out in some cow pasture, far from the old downtowns, I found it eerie how often the year 1978 came up….The only thing I’ve discovered that begins to account for that nationwide pattern is that 1978 was the peak year in all of American history for women entering the work force. In the second half of the 1970s, unprecedentedly, more than eight million hitherto non-wage-earning women went out and found jobs. The spike year was 1978.

That same year, a multitude of developers independently decided to start putting up big office buildings out beyond the traditional male-dominated downtown….The new advantage was proximity to the emerging work force. These Edge City work centers were convenient for women. It saved them time. This discovery was potent. A decade later, developers viewed it as a truism that office buildings had an indisputable advantage if they were located near the best-educated, most conscientious, most stable workers — underemployed females living in middle class communities on the fringes of the old urban areas.

Italics mine. This passage has stuck with me ever since I first read it. Three decades ago employers discovered that as long as their jobs didn’t require much in the way of physical strength — and fewer and fewer jobs did — women were a better employment bet than men. Since then, 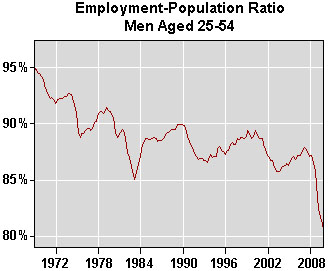 this has become more apparent with every passing year. Which brings us to the recession of 2008-09, as described by Don Peck in the Atlantic:

The weight of this recession has fallen most heavily upon men, who’ve suffered roughly three-quarters of the 8 million job losses since the beginning of 2008….In November, 19.4 percent of all men in their prime working years, 25 to 54, did not have jobs, the highest figure since the Bureau of Labor Statistics began tracking the statistic in 1948.

….According to W. Bradford Wilcox, the director of the National Marriage Project at the University of Virginia, the gender imbalance of the job losses in this recession is particularly noteworthy, and — when combined with the depth and duration of the jobs crisis — poses “a profound challenge to marriage,” especially in lower-income communities. It may sound harsh, but in general, he says, “if men can’t make a contribution financially, they don’t have much to offer.”

Noted without comment, because I really don’t quite know how this is all going to shake out. But I wouldn’t be surprised if we’re entering not merely a slow recovery in general, but an era in which the male employment ratio hovers permanently around 80% even for those in their prime working years. For now, though, just consider this some raw data.