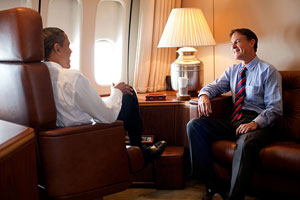 The big political news today is that Sen. Evan Bayh (D–Ind.) has decided not to run for reelection. He made this decision four days before the deadline for candidates to qualify for the June primary ballot, leaving Democrats in a considerable bind. Dave Weigel:

Here are two measures of what a surprise this is. One: Ken Spain, spokesman for the NRCC, simply tweets “unreal” as he begins a series of observations about what this means for Democrats. Two: a Democratic strategist confirms to me that Bayh didn’t let anyone at any level of the party know about this, and shares with me an expletive I won’t share about the man himself.

Luke Russert tweets: “Amazing, Bayh told his staff he was done on Friday and didn’t call Harry Reid until 25 minutes ago!!!” If that’s true, it’s pretty remarkable behavior even for someone as famously callow as Bayh.

So why did he quit so suddenly? His official statement says he’s frustrated with the Senate because there is “too much partisanship and not enough progress — too much narrow ideology and not enough practical problem-solving.” Maybe. Alternatively, he’s tired of taking hits from party liberals, who aren’t exactly fans of his ostentatious centrism and bipartisan preening. That’s pretty much Marc Ambinder’s take: “He wanted to be POTUS and came to hate the Senate and liberal activists. He wanted no mas.”

In any case, Bayh had already raised $13 million for his reelection campaign, and up until a few days ago he was assuring party leaders that he would run. Pulling out at this late date is a pretty explicit show of pique, and an obvious gift to Republicans, whose odds of picking up Indiana in November just went way up. Bayh didn’t quite give Democrats the finger on his way out, but he did everything short of it.