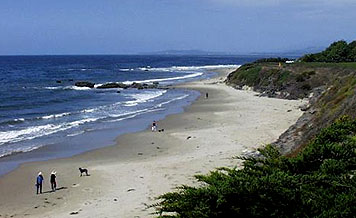 The corporation is Venoco Inc., an independent oil company with revenue of more than half a billion dollars a year, which currently owns an oil storage facility in Carpinteria….This Denver-based firm is spending lavishly to pass a ballot initiative specifically exempting itself from the city’s industrial development and environmental rules.

That’s because it’s afraid that Carpinteria’s elected officials, left to their own devices, might not greenlight its proposal to operate a 10-story oil derrick round the clock on its property next to a 225-home residential neighborhood and on the edge of the ecologically sensitive coastal bluffs.

So here we are on the cusp of a new California trend: businesses that don’t care to bother with legitimate government regulatory procedures scampering directly to the voters. All it takes is money. Venoco has reported spending more than $155,000 on the initiative up to the end of 2009, but a company spokesman told me last week that more money has been spent since then. And the election is still three months away.

So let’s take a guess and say that Venoco is going to spend half a million dollars in a city with 6,000 registered voters. It’s democracy in action! One can only hope that, regardless of the merits of Venoco’s case, the residents of Carpinteria are smart enough to defeat this resoundingly just to send the appropriate message. The corporatization of the California initiative process has been a cancer for a long time, and it’s long past time to put a stop to it.