Specifically, interrogation with enhanced techniques “led to the discovery of a KSM plot, the ‘Second Wave,’ ‘to use East Asian operatives to crash a hijacked airliner into’ a building in Los Angeles.” 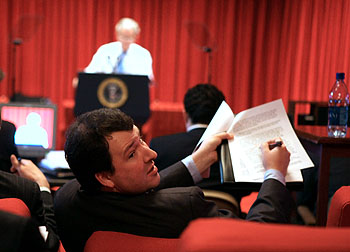 KSM later acknowledged before a military commission at Guantanamo Bay that the target was the Library Tower, the tallest building on the West Coast.

That was in the Washington Post. Here is Tim Noah, writing in the Post’s Slate subsidiary the next day:

What clinches the falsity of Thiessen’s claim […] is chronology. In a White House press briefing, Bush’s counterterrorism chief, Frances Fragos Townsend, told reporters that the cell leader was arrested in February 2002….But Sheikh Mohammed wasn’t captured until March 2003.

How could Sheikh Mohammed’s water-boarded confession have prevented the Library Tower attack if the Bush administration “broke up” that attack during the previous year? It couldn’t, of course.

And Jonathan Bernstein, this morning:

I just saw torture apologist Marc Thiessen on CSPAN repeating, first of all, his argument that the Obama Administration is foolishly killing, rather than torturing, too many terrorists (today’s news apparently notwithstanding; I turned it on too late to hear his explanation if any on that part of it), but more to the point his claim that torture and only torture prevented the Library Plot in Los Angeles from working.

I guess it’s easy to see why the Post wants this guy writing for them on a weekly basis. He never lets the facts get in the way of a good story.