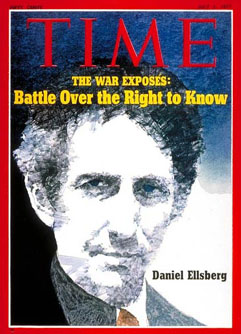 full below. It’s from Ellsberg’s book Secrets, and the setting is a meeting with Henry Kissinger in late 1968 when he was advising him about the Vietnam War. The idea of Kissinger seeking out Ellsberg for advice on Vietnam initially seems a bit unlikely, but in 1968 Ellsberg was a highly respected analyst on the war who had worked for both the Pentagon and Rand, and Kissinger was just entering the government for the first time. Here’s what Ellsberg told him. Enjoy:

“Henry, there’s something I would like to tell you, for what it’s worth, something I wish I had been told years ago. You’ve been a consultant for a long time, and you’ve dealt a great deal with top secret information. But you’re about to receive a whole slew of special clearances, maybe fifteen or twenty of them, that are higher than top secret.

“I’ve had a number of these myself, and I’ve known other people who have just acquired them, and I have a pretty good sense of what the effects of receiving these clearances are on a person who didn’t previously know they even existed. And the effects of reading the information that they will make available to you.

“First, you’ll be exhilarated by some of this new information, and by having it all — so much! incredible! — suddenly available to you. But second, almost as fast, you will feel like a fool for having studied, written, talked about these subjects, criticized and analyzed decisions made by presidents for years without having known of the existence of all this information, which presidents and others had and you didn’t, and which must have influenced their decisions in ways you couldn’t even guess. In particular, you’ll feel foolish for having literally rubbed shoulders for over a decade with some officials and consultants who did have access to all this information you didn’t know about and didn’t know they had, and you’ll be stunned that they kept that secret from you so well.

“You will feel like a fool, and that will last for about two weeks. Then, after you’ve started reading all this daily intelligence input and become used to using what amounts to whole libraries of hidden information, which is much more closely held than mere top secret data, you will forget there ever was a time when you didn’t have it, and you’ll be aware only of the fact that you have it now and most others don’t….and that all those other people are fools.

“Over a longer period of time — not too long, but a matter of two or three years — you’ll eventually become aware of the limitations of this information. There is a great deal that it doesn’t tell you, it’s often inaccurate, and it can lead you astray just as much as the New York Times can. But that takes a while to learn.

“In the meantime it will have become very hard for you to learn from anybody who doesn’t have these clearances. Because you’ll be thinking as you listen to them: ‘What would this man be telling me if he knew what I know? Would he be giving me the same advice, or would it totally change his predictions and recommendations?’ And that mental exercise is so torturous that after a while you give it up and just stop listening. I’ve seen this with my superiors, my colleagues….and with myself.

“You will deal with a person who doesn’t have those clearances only from the point of view of what you want him to believe and what impression you want him to go away with, since you’ll have to lie carefully to him about what you know. In effect, you will have to manipulate him. You’ll give up trying to assess what he has to say. The danger is, you’ll become something like a moron. You’ll become incapable of learning from most people in the world, no matter how much experience they may have in their particular areas that may be much greater than yours.”

….Kissinger hadn’t interrupted this long warning. As I’ve said, he could be a good listener, and he listened soberly. He seemed to understand that it was heartfelt, and he didn’t take it as patronizing, as I’d feared. But I knew it was too soon for him to appreciate fully what I was saying. He didn’t have the clearances yet.