Commercial banks typically make long-term loans, something that can be risky because it ties up their money for years at a time. But usually this isn’t a big problem, since commercial banks also have a very stable deposit base that provides the bulk of their funding.

Conversely, investment banks get a great deal of their funding from overnight loans in the repo market. This can be inherently risky too, but usually it’s not a big problem either because their investments aren’t in long-term loans, but in liquid securities that can be bought and sold quickly if their funding goes south.

But what happens when you have a mismatch? What if institutions with volatile, short-term funding are tying up their money in long-term loans? Via Mike Konczal, Raj Date says this is the real problem we need to address, not Paul Volcker’s plan to prevent commercial banks from doing proprietary trading:

Many of the credit bubble?s excesses can be traced to the “shadow banking” sector, which is essentially the intersection between commercial banking and investment banking business models: shadow banks take illiquid credit and interest rate risk (like commercial banks), but fund themselves principally through the wholesale markets (like investment banks). Because of long-recognized regulatory loopholes, shadow banks were also frequently able to operate with significantly lower capital requirements than commercial bank competitors. With both capital and funding advantages in hand, shadow banks grew to some 60% of the U.S. credit system.

….With that context in mind, the focus of the Volcker Rule, as currently described, seems misplaced — or at least too narrow. The crisis did not stem from commercial banks stumbling into investment banking businesses; the crisis did stem, in the main, from allowing firms that fund themselves in the wholesale markets to take on credit and rate risk as though they were commercial banks or hedge funds.

Note that cheap credit + low capital requirements = enormous leverage. And that makes the entire shadow banking system extremely fragile. The key chart in Date’s presentation is below, but the entire thing is short and worth reading. More later. 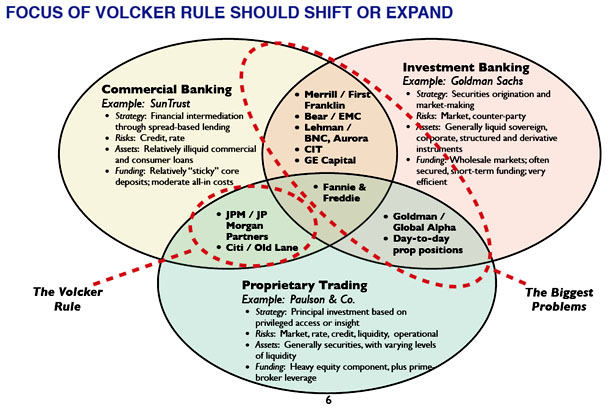