Here’s my capsule view of the great financial meltdown of 2008: For the past couple of decades, the benefits of economic growth have gone almost entirely to the rich. But the middle class still wanted to prosper, so the rich loaned them money to continually improve their lifestyles. That worked for a while. And then it didn’t.

This is a fairly idiosycratic view, and obviously not the whole story. And although plenty of economists have condemned growing income inequality and years of middle class wage stagnation, none of them (as far as I know1) have explicitly 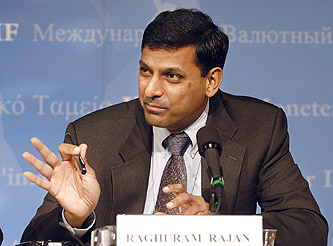 given it a share of the blame for the economic collapse of 2008. But via Mike Konczal, I finally have a credentialed ally. Take it away, Raghuram Rajan:

In a new book he is working on, entitled “Fault Lines,” Rajan argues that the initial causes of the breakdown were stagnant wages and rising inequality. With the purchasing power of many middle-class households lagging behind the cost of living, there was an urgent demand for credit. The financial industry, with encouragement from the government, responded by supplying home-equity loans, subprime mortgages, and auto loans….The side effects of unrestrained credit growth turned out to be devastating-a possibility that most economists had failed to consider.

Like anyone, I’m pleased when I find someone to confirm my prejudices. And this is definitely one of them. Growth in a modern mixed economy2 is fundamentally based on consumer spending, and middle class consumers can increase their spending in only three ways: (1) real wage growth, (2) borrowing, or (3) drawing down savings. Only the first is sustainable. So if we want the American economy to grow consistently over long periods, we have to focus our economic machinery on median wage growth. We’ve done it before, we can do it again if we’re smart, and the result would be good for everyone: the rich would get richer, the middle class would get richer, and the poor would get less poor. The alternative is booms, busts, and continued social erosion. So let’s be smart, OK?

1This is, obviously, a pretty big caveat. But I’d be delighted to hear that I’m out of touch and lots of serious economists have made this case before.

2A democratic one, anyway. In a culture ruled by the wealthy classes, growth can be sustained pretty much any way that the wealthy classes want — and needless to say, this is a disturbingly accurate description of the past few decades. As long as the helots don’t complain, though, it can continue for a surprisingly long time.