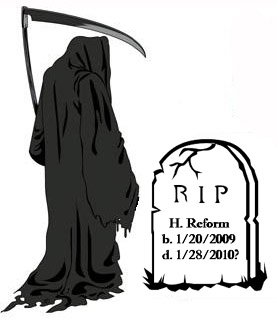 OK, let’s take one more crack at figuring out the likely fate of healthcare reform.  According to the Washington Post, Harry Reid and Nancy Pelosi are still at loggerheads and “congressional Democrats remained in disarray Thursday about how to move forward, with at least some pointing at the White House as the cause of the legislative standstill gripping Capitol Hill.” OK then. So what’s the direction from the White House? Here’s the New York Times:

With Mr. Obama’s health care overhaul stalled on Capitol Hill, Rahm Emanuel, the White House chief of staff, said in an interview that Democrats would try to act first on job creation, reducing the deficit and imposing tighter regulation on banks before returning to the health measure, the president’s top priority from last year.

….Mr. Emanuel, the chief of staff, said he hoped Congressional Democrats would take up the jobs bill next week. Then, in his view, Congress would move to the president’s plan to impose a fee on banks to help offset losses to the Troubled Asset Relief Program, the fund used to bail out banks and automakers.

Lawmakers would next deal with a financial regulatory overhaul, and then pick up where they left off on health care. “All these things start and lead to one place: J-O-B-S,” Mr. Emanuel said.

Given the normal pace of congressional action — including the usual Republican obstruction — this would mean no action on healthcare for at least a month or two. Maybe more like three or four. Or maybe never.

New pronouncements seem to come almost hourly on this stuff, so I’ll wait for a few other folks to chime in before coming to any conclusions. But if healthcare is now domestic priority #4, it might as well be domestic priority #100. It might not quite be dead, but no matter what Obama said in his State of the Union address, the grim reaper is starting to hover uncomfortably close by.