Jon Chait says the combination of an angry left, an inflamed right, and a despondent middle remind him of the mood during the 2000 recount:

It’s different, of course, in that the Florida recount involved a massive procedural injustice, and the current situation does not. But all the other pieces are in place. You have the destructive left, then enthused by Nader, now enthused by the 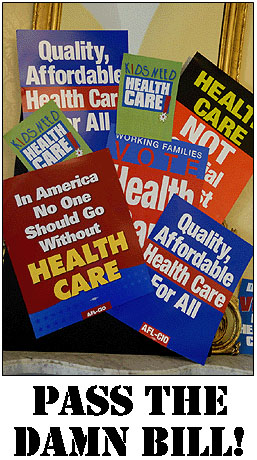 prospect of killing reform (see this emblematic campaign by Firedoglake to stop the one plausible path to comprehensive reform.) You have a wild, energized right willing to push its cause to the absolute limit. And among mainstream Democrats, you see the same torpor.

….[House Democrats are] angry, they’re tired, they’ve lost interest in weighing the merits of a decent compromise option versus a catastrophic failure, and most of all they want somebody else to deal with it. If they fail to pull themselves together, future generations will look back at them, note that Congress had passed comprehensive reform in both chambers, had the backing of an eager Democratic president, and could finish the deal by getting 218 of their 256 Democratic members to sign on, and somehow refused. I still find the idea that they’ll allow this to happen unfathomable. If they do succumb, it will be because some deep and recurrent character flaw rose to the surface at the worst time, once again.

I agree. Sure, the Senate bill isn’t perfect. Nothing ever is. But the political situation has changed and it’s now the only game in town. It’s beyond belief that we could get this close to a century-old goal of liberalism — we are, literally, just a hair’s breadth from the finish line — and then allow the most significant social legislation of the past 40 years to slip from our grasp just because we’re tired and pissed. All we need is one roll call vote in the House. That’s how close we are to passing this genuinely historic bill. One vote. Then the next day we can start in on the next 20 years work of improving and finishing what we’ve begun.

We can’t allow this to fail now. We can’t let the Fox/Drudge/Rush axis win. So call your congressman. Go organize a rally. Write a letter to the editor. Lobby your union president. Do something. Do it now. Tell them: Pass the damn bill. Pass it now.