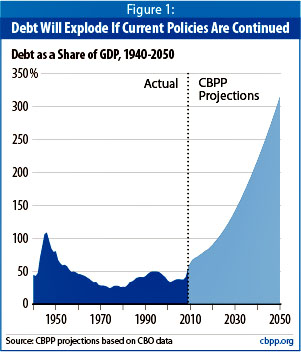 The Center on Budget and Policy Priorities — which desperately needs a more user-friendly name, by the way — says that our long-term federal deficits are unsustainable. In order to get them to sustainable levels we need a combination of tax increases and spending cuts equal to about 4.9% of GDP. Here’s a start:

If policymakers were to allow all of the 2001 and 2003 tax cuts to expire as scheduled at the end of 2010 — or fully offset the cost of extending those tax cuts they choose to extend — this alone would shrink the fiscal gap by almost two-fifths, from 4.9 percent of GDP to 3.0 percent.

Sounds good. Except that this would take us back to the fiscal hellscape of the late Clinton era, and who wants that?

The CBPP report is pretty discouraging, but the really discouraging thing about it is this: “Policymakers should also expect to return to long-term deficit reduction multiple times over coming decades; the problem is far too large to address in a single legislative package.” Strictly speaking, this is true: you wouldn’t want to literally do this in a single piece of legislation. But if we were even close to having a sane political class in this country, it wouldn’t be that hard to hit this target: (1) Let the Bush tax cuts expire. Nobody was overtaxed in the 90s. (2) Do a conventional fix for Social Security. This would be good for another 1% or so. (3) Get serious about reining in Medicare costs. Squeezing another 1% via Medicare changes wouldn’t be that difficult if both parties were willing to treat it as a real problem instead of a chance for demagoguery. (4) Add in a modest assortment of spending cuts (smaller military, unprivatized student loan, reduced ag subsidies) and revenue increases (estate taxes, carbon taxes, financial transaction taxes) and you’d get the rest of the way there. If you don’t like these suggestions, feel free to sub in your own ideas here.

For a country as big and rich as the United States, this stuff isn’t even very painful. We could do it in a single legislative session and 99% of the country would barely notice the effects. And yet it’s the next best thing to impossible. It doesn’t speak well for our future.