As the punchline to a nerdy joke about the efficient market hypothesis, Daniel Gross 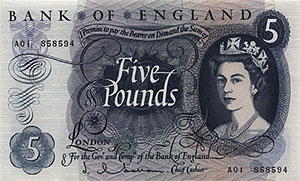 tells a story about noticing something that looked like money lying on the ground at Davos:

And so I bent down and picked up the paper. On one side, the grim visage of Queen Elizabeth. On the other, Charles Darwin. It was a 10 pound note, worth about $16.25. Just lying on the floor, unmolested by Nobel Prize-winning economists, CEOs of Fortune 500 companies, and financial journalists.

In 1967, when I was nine years old, I found a five-pound note lying on a railway platform in England. At the time, the exchange rate to dollars was 4:1, so it was worth $20. Adjusted for four decades of inflation, that comes to $128. This compares very favorably with the dimes I occasionally found at home in the coin return slots of pay phones.

It’s also (by a long way) the largest sum of money I’ve ever found lying on the street. How about you?

UPDATE: Sorry, I must have had a historical blackout. As Anonymous says in comments, the pound in 1967 converted at $2.80. So that’s $14 at the time, and $90 today. Still the largest sum I’ve ever picked up off the street, though.