Matt Yglesias pushed back yesterday against the idea that the only people who think Jimmy Carter was a good president are “people who are too young to actually remember the Carter years.” But then he conceded: “Does that mean Carter was a great president? No. Obviously, he left little in the way of enduring achievements.”

I think that deserves some pushback of its own. Carter was president during a difficult period, and politically he turned out to be fairly tone deaf and ineffective. As someone who didn’t vote for his reelection in 19801 I won’t defend him as a great president, but substantively he left behind more in the way of enduring achievements than most people give him credit for. 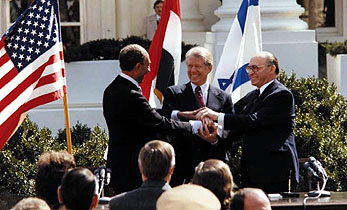 He was the first president to make human rights a centerpiece of our foreign policy, a stance that Ronald Reagan adopted to great effect and something that’s been a part of American diplomatic relations ever since. He managed to return the Panama Canal to Panama, a brave, politically costly fight that could have been disastrous if he’d lost it. He helped make peace between Israel and Egypt at Camp David. He appointed Paul Volcker as Fed chairman and allowed him to begin squeezing inflation out of the economy — something that very possibly cost him the 1980 election. He began the wave of deregulation that Reagan and others extended for the next 30 years. He started the secret war against the Soviets in Afghanistan. And although his efforts to push energy conservation died after he left office, they look prescient now.

This is actually a pretty substantial legacy — but it isn’t entirely liberal or conservative. Liberals generally look favorably on Carter’s work on human rights and the Middle East. Conservatives favor — or should favor, if they’re being honest — his deregulatory efforts, the appointment of Volcker, and his willingness to engage the Soviets in Afghanistan. I’ve always suspected this is why Carter gets so little love: his overall legacy has too many conservative elements for liberals to really embrace him, but his non-hawkish attitude toward the Cold War and his inability to rally the country make him a conservative bête noir. And of course, his achievements have been overshadowed by his ultimate association with stagflation, oil shocks, and the Iranian hostages. But none of that alters the fact that, for better or worse, he changed the country more substantially than I think most people realize.

1Since I always get asked this, no, I didn’t vote for Reagan. I voted for John Anderson.