I’m never quite sure how seriously to take this stuff, but left-leaning pollster Democracy Corps did some dial testing of Obama’s speech last night with “50 independent and weak partisan voters in Nevada”:

This difficult audience for Obama was a heavily Republican-leaning group (46 percent Republican, 20 percent Democratic) that split their votes in 2008 (52 percent Obama, 46 percent McCain) but had 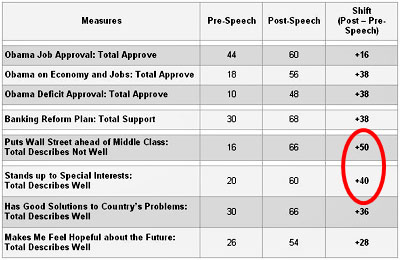 moved away from him over the past year, with majorities expressing disapproval with his job performance and unfavorable views of him on a personal level.

So how did Obama do with this crowd? Apparently his strongest suit was bank bashing and standing up to special interests:

These voters were especially pleased to see him express his anger about the behavior of banks that received bailouts, and they accepted the president’s explanation that the banking bailouts were an unpleasant but necessary action for the government to take.  These swing voters also focused on Obama’s call to end tax breaks for companies that outsource jobs overseas and his pledge to double exports.  They viewed these two issues as closely linked, emphasizing the fact that we need to start “making stuff” in America again if we are going to have any chance of increasing our exports.

I expect a bull market in bank bashing rhetoric this year. Unfortunately, I’m less sure about the market for serious banking reform.