When I heard that Virginia’s shiny new GOP governor, Bob McDonnell, was going to deliver the response to the State of the Union address tonight, my first thought was, “Does he have a death wish? Why is he planning to wreck his career before it’s even started?” After all, SOTU 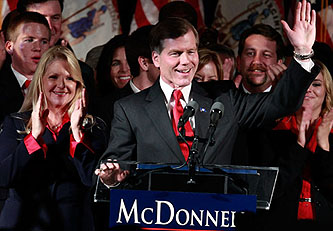 responses are famously stiff and crappy and almost never make their speaker look good. Speeches like this really need to be delivered in front of a crowd to be effective, instead of recited stiffly into a bare camera.

But it turns out McDonnell is a smart cookie. Via Matt Yglesias, here’s his plan:

When the national spotlight turns to Gov. Bob McDonnell tonight as he delivers the Republican response to President Barack Obama’s State of the Union address, he’ll be surrounded by 300 people in the chamber of the Virginia House of Delegates. McDonnell plans to stand in the well of the House accompanied by family, supporters, administration officials, activists and lawmakers, some of whom will stand on risers set up for the live speech.

This is still less than ideal. It would be better to fill the whole chamber, rather than set up risers for a few hundred supporters. You need loud applause! You need cheers! But it’s still a big improvement. It’ll be interesting to see if McDonnell makes anything of it.