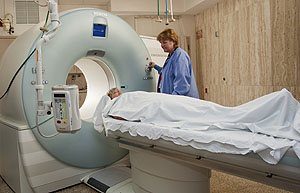 Overuse of MRI and CT scans is a common problem, due partly to physicians who like the fees from the tests and partly to patients who demand them even when they aren’t needed.  But it looks like patients ought to think twice about this:

Widespread overuse of CT scans and variations in radiation doses caused by different machines — operated by technicians following an array of procedures — are subjecting patients to high radiation doses that will ultimately lead to tens of thousands of new cancer cases and deaths, researchers reported today.

….In one study, researchers from UC San Francisco found that the same imaging procedure performed at different institutions — or even on different machines at the same hospital — can yield a 13-fold difference in radiation dose, potentially exposing some patients to inordinately high risk.

While a normal CT scan of the chest is the equivalent of about 100 chest X-rays, the team found that some scanners were giving the equivalent of 440 conventional X-rays. The absolute risk may be small for any single patient, but the sheer number of CT scans — more than 70 million per year, 23 times the number in 1980 — will produce a sharp increase in cancers and deaths, experts said.

….The highest doses of radiation are routinely used for coronary angiography, in which cardiologists image the heart and its major blood vessels to look for blockages or other abnormalities. Under the normal dosages of radiation for the procedure, about 1 in 270 women and 1 in 600 men who receive it at age 40 will develop cancer as a result, reported Dr. Rebecca Smith-Bindman, a professor of radiology and epidemiology at UC San Francisco, and her colleagues.

This is bad news for patients, but undoubtedly a boon for CT scan manufacturers, who are going to make a fortune selling newer, safer machines to replace the thousands currently in use.  Siemens stock should do well.