Stephen Walt pushes back on Tom Friedman’s view that Muslims ought to realize that over the past couple of decades “U.S. foreign policy has been largely dedicated to rescuing Muslims or 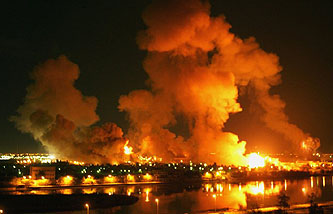 ….If you really want to know “why they hate us,” the numbers presented above cannot be ignored. Even if we view these figures with skepticism and discount the numbers a lot, the fact remains that the United States has killed a very large number of Arab or Muslim individuals over the past three decades. Even though we had just cause and the right intentions in some cases (as in the first Gulf War), our actions were indefensible (maybe even criminal) in others.

….Some degree of anti-Americanism may reflect ideology, distorted history, or a foreign government’s attempt to shift blame onto others (a practice that all governments indulge in), but a lot of it is the inevitable result of policies that the American people have supported in the past. When you kill tens of thousands of people in other countries — and sometimes for no good reason — you shouldn’t be surprised when people in those countries are enraged by this behavior and interested in revenge. After all, how did we react after September 11?

Raw numbers like this obviously aren’t the whole story.  On the other hand, when you get beyond the raw numbers it’s not as if the scales suddenly tip overwhelmingly in our favor.  So whole story or not, it’s a data point worth keeping sharply in mind.  Click the link for Walt’s entire list.