Matt Taibbi’s long polemic about Barack Obama’s economic team in the current issue of Rolling Stone has attracted its share of both support and derision in the blogosphere over the past couple of days.  Big surprise, eh?  Digby rounds up some of the reaction here.

Well, after reading the piece this afternoon you can basically count me among the supporters.  Is it over the top?  Of course it is.  Are there some matters of interpretation that I think Taibbi gets a bit wrong?  Sure.  For example: the conceit of the piece is that Obama chose to build his economic team around people who were acolytes of 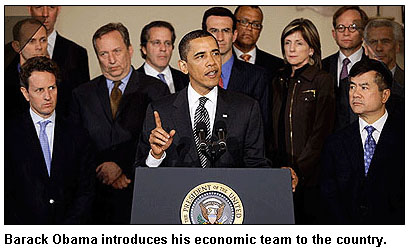 Bob Rubin, and this strikes me as misguided.  Basically, Obama chose to build his economic team around mainstream Democratic economists with previous government experience, and virtually all of these guys have ties to each other and therefore to Rubin.  That’s every bit as bad — maybe worse, in fact — but it changes the problem from one of personal influence to one of systemic influence.  There’s a real difference there.  What else?  Taibbi spends a lot of time on Rubin pal Michael Froman, who led Obama’s search for an economic team during the transition, and this leads him to say that Tim Geithner was “hired to head the U.S. Treasury” by Froman.  But that’s kind of silly.  At the cabinet level, Obama didn’t need Froman’s advice.  He chose Geithner all on his own.  Taibbi also commits one of my pet peeves, suggesting that the bailout may eventually cost taxpayers $23 trillion.  That’s ridiculous.  He also fails to emphasize enough that virtually all of the bailout money was directed by the Fed and virtually all of it predates Obama’s presidency.

But look: this is all just nitpicky bullshit.  Taibbi’s piece is basically about how the finance industry owns Congress and the Obama administration, and that’s basically true.  In fact, I have a piece coming out in a week or so in the print magazine that makes pretty much the same point.  My approach is different, and my language is all PG-rated, but my conclusions are pretty much the same.  The finance industry, through both standard lobbying and what Simon Johnson calls “intellectual capture,” has, over the decades since Reagan was elected, convinced nearly everyone that what’s good for Wall Street is good for America, and that what’s bad for Wall Street would be catastrophic for America.  Everything else follows from that.

So, sure, I think Taibbi overstates Rubin’s influence and thereby understates the real systemic problem here, but hey — it’s his article, not mine.  Generally speaking, he gets his facts right and he gets the big picture right: Obama’s team is nearly as dedicated to the economic status quo as Republicans are.  Ditto for many — though not all — Democrats in Congress.  It’s worth reading.

What’s most troubling is that we don’t know if Obama has changed, or if the influence of Wall Street is simply a fundamental and ineradicable element of our electoral system. What we do know is that Barack Obama pulled a bait-and-switch on us. If it were any other politician, we wouldn’t be surprised. Maybe it’s our fault, for thinking he was different.

I don’t think Obama has changed, or that he pulled a bait-and-switch.  In fact, I’d say his moderate, mainstream centrist approach to the economy was pretty clear during the campaign.  I vote instead for the influence of Wall Street being a “fundamental and ineradicable element of our electoral system.”