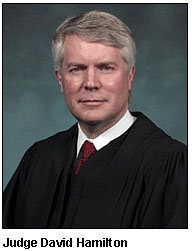 Back in September, The New Yorker’s Jeffrey Toobin reported that the administration nominated [David] Hamilton in order to show that it was taking a new, post-partisan approach to judicial appointments. And Hamilton is indeed a moderate: He was backed by Richard Lugar, a Republican senator from his home state of Indiana, and was endorsed by the head of the Indiana chapter of the Federalist Society….Yet Hamilton was voted out of the Senate Judiciary Committee on a strictly party-line vote. He was filibustered on the floor of the Senate. And, after cloture was successfully invoked, not a single Republican besides Lugar voted to confirm him.

Hamilton isn’t unique. Obama’s other federal appellate nominees have also been generally moderate, safe choices. A majority of them have served as prosecutors (usually considered evidence that a judge might lean more to the right than liberals would want). Beverly Martin, a nominee from Georgia, was endorsed by both Republican senators from the state. Albert Diaz was a lawyer for Big Tobacco. Barbara Keenan has upheld the death penalty for crimes committed by juveniles.

But none of this matters.  Hamilton was filibustered and only two of Obama’s other 11 nominees have been approved so far. Republicans are engaged in full-on obstruction of everyone Obama nominates no matter what. So why bother trying to make nice? If Republicans are going to do the scorched-earth thing regardless, why not nominate some real liberals?  Scott Lemieux agrees:

I’m generally wary of the idea that Congress would magically start generating better policy if Obama would just become more uncompromising. But with respect to judicial appointments, Obama’s preemptive concessions really have been counterproductive. It’s not at all surprising that his attempts to put forward moderate appointments is not working — after all, we’re dealing with conservatives willing to claim that Cass Sunstein is a wide-eyed radical.

And, what’s worse, putting forward moderate nominees will continue the asymmetry in which Republican presidents take the ideological direction of the federal courts very seriously while Democratic presidents are willing to settle for moderates to focus on other priorities. There’s no reason to continue this. Given that Republicans will portray anyone to the left of Anthony Kennedy as a lawless Trotskyite, Obama needs to make stronger liberal appointments and accept that not everyone will get confirmed.

I assume the question here is “when,” not “if.”  Obama clearly seems dedicated to a program of compromise and bipartisan comity, and he wants to keep at it long enough to give it a real chance of working.  But how long is long enough?  I never really believed Republicans were ever likely to respond to olive branches in the first place — they need a few more years in the wilderness before they’re willing to really take stock of the corner they’ve painted themselves into — so I’m not a good judge of this.  But it’s been nearly a year now and Republicans, if anything, are more intransigent than they were on inauguration day. How much longer does Obama give them? Another year? Two? At what point does he finally give up and decide that he’s just being played for a patsy?