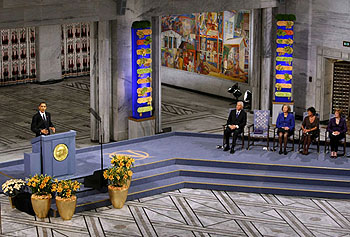 He didn’t give the address that American neoconservatives would have written for him, obviously, but pieces of that speech showed up — the defense of the war in Afghanistan and the idea of just war in general; the Bush-ian, “make no mistake, evil does exist in the world” line; the insistence that “the United States has helped to underwrite global security for sixty years, with the blood of our citizens and the strength of our arms.” He didn’t give a Gandhian ode to nonviolence, or an activist’s paean to human rights, but those threads were woven in as well.

He talked up international institutions, promised action against climate change, and took credit for ordering the closing of Guantanamo (one of the few applause lines, inevitably), but at the same time he praised the use of force for humanitarian purposes, and reserved the right to act unilaterally in America’s interests. He defended diplomatic outreach to Iran, called on the world to put pressure on Iran’s nuclear program, and promised that the world would stand behind Iran’s protestors — and he made it all run smoothly together, in rhetoric if not in reality. And he managed to co-opt everyone from M.L.K. to J.F.K. to Nixon to John Paul II and Reagan along the way.

I didn’t listen to the speech, but I’ve read it and I mostly agree.  (Here’s a transcript.)  Frankly, though, I really don’t think neocons have much to complain about even if Obama didn’t use the opportunity to announce construction of a new generation of nuclear missiles or something.  Given that he was, after all, accepting a peace prize, it was a surprisingly robust defense of war and America’s military role in the world.  Surprisingly Bushian, really, with one obvious caveat: among the many wars he mentioned as necessary and justified, there was one that was deliberately conspicuous by its absence: Iraq.  So neocons have that to gripe about if they’re in a griping mood.  (And when are they not?)

One additional thing that struck me, though, was that the speech seemed pretty mechanical.  Like his West Point address.  It’s possible that this is more an artifact of reading the transcript vs. hearing the speech, but it sounded to me a little too obviously like he was trying to thread a needle.  There wasn’t any single place where I felt like he laid down a marker and really spoke about something he believed deeply in.  Dan Drezner made (I think) a related point: “Pick a paradigm, and you can find a sliver of the speech dedicated to its theoretical propositions.”  But he also explained it: “Doesn’t this imply that the speech was logically contradictory?–ed.  No, it implies that the world is a hell of a lot more complex than any of these theoretical approaches.  Alas, knowing when to apply each of these worldviews is more art than science.”

And there’s another parallel between Obama’s West Point speech and this one: both times he told his audience (i.e., the one actually in the room with him) something they didn’t want to hear.  At West Point he stressed that we have limited resources for war when those resources are desperately needed at home.  In Oslo he stressed that wars aren’t going away and the United States is going to keep fighting them.  Is this a demonstration of bravery?  Or an indication that his real audience is always the one on TV?  Either way, I’d say it worked better this time than it did last week.