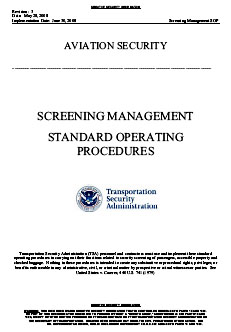 As you all know, the Transportation Security Administration mistakenly posted a copy of its screening manual a few days ago, providing access to lots of interesting little nuggets about how they operate.  The manual was supposed to have sensitive portions blacked out, but as in so many previous cases, the people who did it didn’t realize that PDF documents come in several flavors:

….This is not the first time that redacted documents have leaked sensitive data.  AT&T lawyers defending their company in a spying suit made the same mistake three years ago in a redacted court filing. Confidential details discussed during a closed-door settlement hearing in a lawsuit against Facebook were revealed earlier this year when parts of the hearing transcript were insufficiently redacted. Federal prosecutors also made redaction errors in court documents they filed against two San Francisco reporters who covered the BALCO steroids story.

In 2003, the Justice Department botched the redaction of a controversial workplace diversity report, and in 2000 the New York Times inadvertently leaked the names of CIA collaborators when it published an improperly redacted CIA file on its website that documented American and British officials’ engineering of the 1953 Iranian coup.

I’ve long wondered when government agencies will finally figure out how PDF documents work, but so far the only answer is “not yet.”  In the meantime, my great fear is that some overzealous bureaucrat is finally going to get tired of this and decide that the only answer is a government-wide ban on PDFs.  Or perhaps a government-wide ban on searchable PDFs.  That would be a huge pain in the ass for the rest of us.  But you just know it’s coming if this kind of thing keeps happening.